How To Start a Science Riot

In 2015, I met with a group of naïve scientists in a Colorado pub. The three of us – a pilot, a microbiologist, and a paleontologist – agreed that “Science Riot” was a catchy non-sequitur. The idea of introverted scientists taking the street in their lab-coats was undeniably hilarious. We never thought it would actually happen.

By November, 2016 we had spent nearly two years conducting “fieldwork” across the state. In the end we had organized events ranging from interviewing astronauts at local breweries to filling 300-seat rooms at massive pop-culture conventions. I collected 2,000 surveys from audience members for my Master’s in Science and the Public and we were turning those insights into sold-out events. Our labor of love was a program that taught scientists a crash-course in comedy before throwing them on stage.

The toughest part of the process was usually convincing scientists to sign up in the first place.

There was no doubt then or now that science itself had been politicized and undermined by the campaign. Two days after the election we were at the Denver Museum for Nature and Science organizing an event – and the mood in the audience was palpable. The show went well, but backstage my coproducers were facing a crisis of self-doubt. At least I was. Was it making a difference? Did attendees really take anything away from all of this? Did we ever really engage an audience who wasn’t already engaged?

We were convinced that the answers were yes, but we weren’t sure if we had moved the needle on science literacy.

We put out signups for future workshops at each event, but only ever had a handful of signups from the audience. Recruiting was typically like pulling teeth. But this time there were more than twenty names on the list. Our signups had more than tripled. And it changed my perspective entirely.

I finally realized: This program isn’t about the audience. The public isn’t the problem.

After trying some comedy for the first time, participating scientists look like they just went skydiving without a parachute. Talking to normal people was the scariest thing they had ever done. After the fact, half of them asked for more speaking opportunities. It was obvious that other scientists in the room saw this and shared the urge to say something, even if they didn’t know how. This sentiment later grew into the March for Science where thousands of introverts took to the streets in their labcoats after all.

Scientists and institutions have been demanding increased outreach since the beginning of science. But few scientists know where where to start. So we’ve focused on programs that develop scientists as communicators. We’re trying to get scientists comfortable behind a microphone; teach organizers how to reach new audiences, and talk about what is working in science programming.

Will Scientists Actually March For Science?
“…sooner or later this combustible mixture of ignorance and power is going to blow up in our faces.” 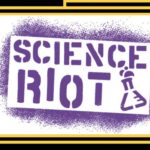