Editorial For Institutions For Scientists

How Comedy Helps Us Communicate

I frequently get asked this by puzzled people and they have a point. With Science Riot, I’m advocating something pretty unusual: teaching scientists to be comedians and to use comedy as a tool for public outreach. Only a small portion of scientists do outreach at all and if you still struggle with populating your PowerPoint textboxes, “comedy” might seem like an intimidating genre to approach. I love getting this question because I love the answer: We use comedy because it’s more effective than pedantic haranguing and more fun than Instagrams of baby sloths, unless you happen to be really keen on baby sloths.

Most of us scientists spend our time inside the “science bubble,” where other people are generally on the same wavelength. Comedy scrambles that paradigm and captures the attention of the chunk of the population who have never felt the masochistic need to put themselves through two semesters of organic chemistry that they never used again after the final exam, despite their academic advisor telling them it would be invaluable to their futures. Even as a scientist, which presentation would you rather attend: the one titled “Statistical Analysis of Carbon-Influenced Climate Dynamics” or the one titled “Sno-Cone History of Earth: Syrup on the Bottom”? I’d probably remember a lot more of my organic chemistry education if my professor had cracked a joke about carbon chains using alcohol to pick up a methyl group in a bar.

I tell folks that comedy is the aspartame of academia. It’s a sweetener that makes difficult material go down easily. People like to laugh. To get nerd on you for a moment, laughter releases the same brain chemicals as MDMA, the (illegal) party drug known as Ecstasy. Associating tricky technical topics with the positive experience of laughter turns work into enjoyment. We know the learning is happening, but the funniness, like Diet Coke, tricks your neural circuits into thinking that the brain is getting a huge reward even though you’re really just learning new things. And that statement right there is some pretty heavy neuro-nerd stuff.

Comedy works so well as a science communication tool because comedy, like the mirrors of the Hubble telescope, must be exactly precise. Just like we’ll never get an in-focus photo of the guts of the Andromeda galaxy without precision-tuning Hubble’s mirrors, you’ll never get a really sharp joke without fine-tuning the content of your material. You could also think of writing comedy as Tweeting. (Forgive me for positioning the Hubble project’s masterpiece of scientific exploration next to Twitter’s cesspool of incivility.) Twitter requires us to be pithy and concise, just like jokes force us to exclude all extraneous material and focus on the core concept, well rendered. Once you reduce a concept to its elemental purity, you can step on stage, naked and afraid, in front of an audience ready to ravage your darling joke into a bleeding pile of dangling participles. I’m just kidding. You don’t have to be naked.

After I answer the “Why comedy?” question, the next thing the interested-but-hesitant, science-y people tell me is, “I’m not funny. I couldn’t ever do comedy.” Au contraire, my friend. Comedic technique is like the scientific technique: it can be learned and applied to any topic. Yes, you can be funny. Yes, you can do comedy. But unfortunately, I can’t help you with that PowerPoint. 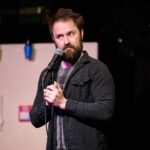